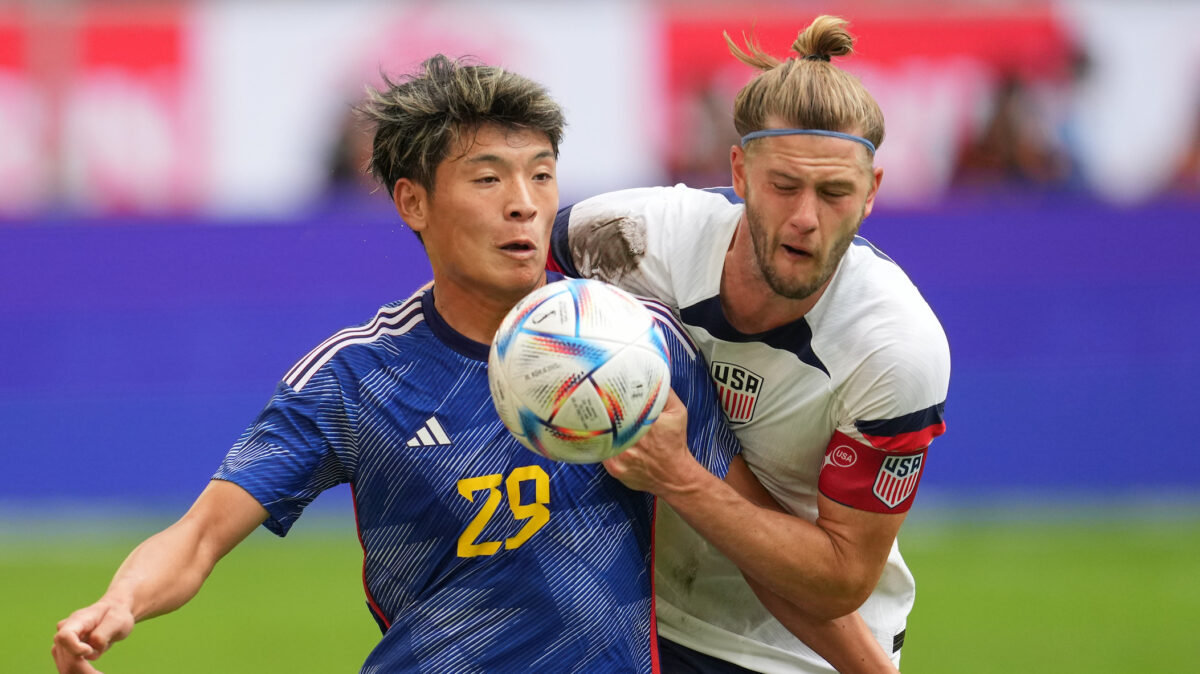 The U.S. men’s national team played its first match in more than three months, and came away looking like a team that needs a lot more work if it is going to be ready for the World Cup in less than two months. Daichi Kamada and Karou Mitoma propelled Japan to a 2-0 victory over the Americans in Dusseldorf, handing the USMNT its first defeat since March’s final round of World Cup Qualifying. The Americans produced the first major chance of the match, and their only real chance of the match, in the eighth minute but Jesus Ferreira was unable to convert an excellent cross from Sergiño Dest, skying a free header to keep the score 0-0. Kamada needed only 24 minutes to boost Japan in front, sliding a right-footed shot into the bottom corner on a goal initially ruled offside. Referee Felix Zwayer reviewed the play via VAR and determined that Walker Zimmerman played Kamada onside. The USMNT offered little in the final third, failing to get any of its attacking pieces involved. Countless pressure from Japan led to several USMNT turnovers, setting the stage for a busier second half for USMNT goalkeeper Matt Turner, who was the lone bright spot in the loss, making six saves and helping the Americans avoid a larger margin of defeat. Turner continued to keep the USMNT’s deficit at one goal, denying Junya Ito’s right-footed effort in the 54th minute before repelling Kamada’s shot in the 65th.  Ritsu Doan’s long-range shot was heading into the top-left corner in the 75th minute, but Turner dove to his right to punch over the midfielder’s shot. The arrivals of Josh Sargent, Jordan Morris, and Reggie Cannon did little to change the USMNT’s lackluster attack as Japan continued to hit the Americans on several counter attacking chances. Kaoru Mitoma came off the bench in the second half and delivered Japan’s insurance goal, cutting past Cannon and into the box before curling a shot into the bottom-right corner. Japan secure a 2-0 win over the USMNT to kick off the international break pic.twitter.com/shduF3c28J— ESPN FC (@ESPNFC) September 23, 2022 The USMNT played without star Christian Pulisic, who was held out of action after picking up a knock in training during the week. The USMNT will now aim to rebound in Tuesday’s final friendly before the World Cup, a showdown with Saudi Arabia in Murcia, Spain.