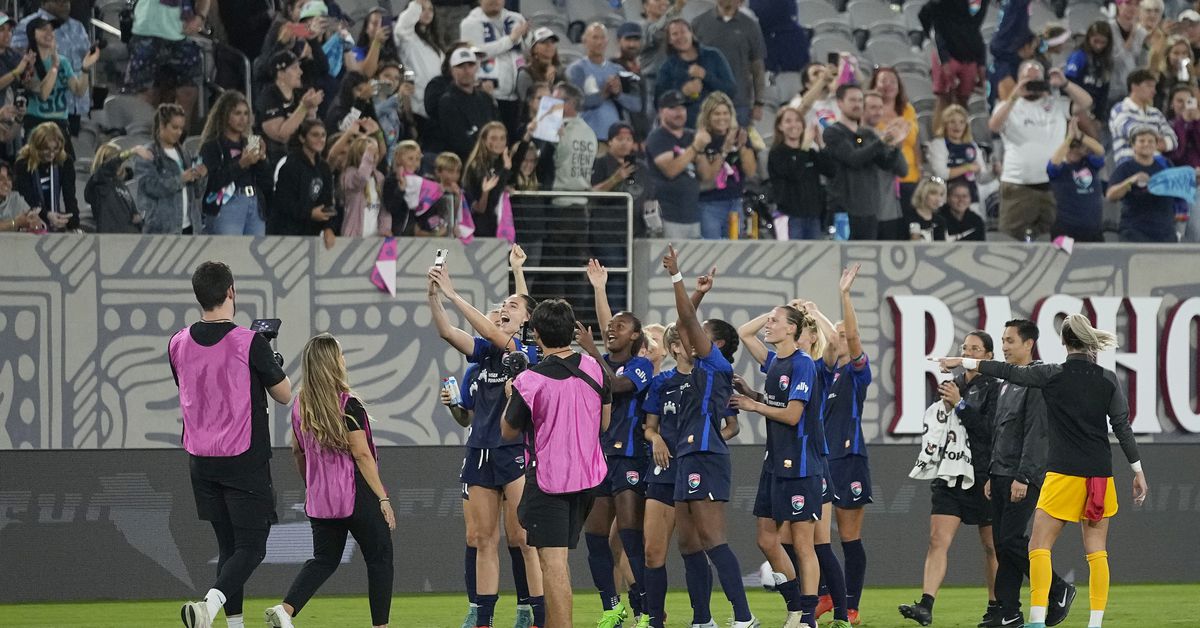 Analyzing the Wave’s first-ever win at their new home.

Moving into a new home is always a momentous occasion. However, when you can move into a new home while being accompanied by 32,000 of your friends and capping it off with a victory, then it becomes an even more special occasion. Last Saturday, San Diego Wave FC were able to do exactly that.

And best of all, they did so by beating their cross-freeway rivals, Angel City FC. Here’s a look at how San Diego were able to make this special occasion happen.

During the match, Jaedyn Shaw and Sofia Jakobsson would often switch positions and move from the left and the right channels. Makenzy Doniak and Taylor Kornieck also switched positions around the 31st minute. This was done to create offensive overloads while the team were in attack. And it worked, as the Wave scored in the 31st minute and ended up winning the game.

It was perhaps fitting that the pre-game festivities for this game included the Navy SEALS parachuting in and the Marines flying helicopters overhead, as the Wave would have to soldier on and defend their own fort. The team started the match out on the front foot as they were proactive, as they were pressing high up the pitch and winning headers in the midfield.

They had their first shot on target in the second minute, after Abby Dahlkemper’s long ball over the top found Sofia Jakobsson. Jakobsson then laid it off to Alex Morgan, who then fired the shot directly at Didi Haračić.

Part of the reason why San Diego had a few early looks on goal was how they would shift players to one side of the field. As was mentioned before, Jakobsson and Shaw frequently switched flanks during the game, as they’d move from the left and right channels. This helped create offensive overloads on one side of the pitch and led to the Wave stretching Angel City’s defense, thus opening up a few pathways towards goal.

Attacking overloads can take place in the penalty box or on the flanks. Doniak and Morgan would often drift into wide spaces to support the wingers and fullbacks. This would then allow Kornieck to occupy the space centrally and make runs into the box and become a target for headers.

However, San Diego’s tendency to commit numbers to one side of the field often left them vulnerable to counterattacks.

At around the 10:00-minute mark, Jun Endo was left unmarked and was free to intercept a pass and then make a run towards goal. Fortunately for the Wave, Angel City couldn’t finish any of their chances. This would be the theme for the visitors for the entire game, along with their tendency to exploit the right flank.

The two teams would engage in this jousting match in this manner but it would be the Wave who would draw first blood. It was Sofia Jakobsson who would win the ball at the edge of the box before pinging it off Westphal, who then sent it to Morgan, who then passed it back to her teammate. Jakobsson would then send a cross into the box which then found the head of one Jaedyn Shaw. The rest, as they say, is history.

It was quite literally a historic and momentous occasion, as 17-year-old Jaedyn would have the honorable distinction of scoring the first goal in her new home. Halftime would soon come and San Diego went into the locker room with the lead.

The second half of the match would see Angel City gradually grow into the game. They would have more of the ball by disrupting the Wave’s passes through a combination of relentless pressing and winning second balls. An example of this would be when Shaw was harried off the ball and ended up lobbing a pass in the path of Endo. The midfielder then sent the ball into the box and put San Diego under a spell of pressure. It seemed like the Wave were besieged in their own half for minutes on end.

As the game wore on, the players themselves got pretty frustrated by this. One of those players was co-captain, Alex Morgan. After the game ended, she summed up some of the problems that San Diego had during this match.

“I think our defensive positioning was a little off. I think we played some poor passes in the middle of the park that got picked off unnecessarily. I think with that sometimes I felt as I was pressing I felt we didn’t have our ten or our other players around me helping me [...]”

Angel City’s defense further compounded that frustration by perfectly executing their offside traps. As a result, San Diego were offside a total of six times. The Angelinos, in contrast, were not offside even once.

Eventually, the visitors’ pressing and probing would pay off for them. Around the 72nd minute, Westphal tripped Claire Emslie at the edge of the box and the forward was all too happy to sell the drama and fall to the ground. The ref then pointed to the spot and Savannah McCaskill stepped up to the spot to equalize for her team. Unfortunately for McCaskill, it was not to be, as Kailen Sheridan had other plans.

Sheridan would stop McCaskill’s penalty and thus save San Diego’s lead. It was her third penalty save of the season and the ninth overall in her NWSL career. Shortly after the save, chants of ‘Beat LA’ would ring out around the Snapdragon. The audial encouragement worked and the Wave would see the game through.

They would emerge as the victors of this match and shut Angel City out in the process. The story of the night can be summed up by a San Diego sports team beating a team from Los Angeles and best of all, they managed to do it in front of 32,000 people, the majority of whom were cheering on the home team.

It was truly a magical and special night for the San Diego Wave and it was the best way for them to begin life in their new home.

Of course, it would be an absolute folly not to mention the role the defense played in this victory. Though Abby Dahlkemper was the captain, the backline was most definitely marshaled by Naomi Girma. The defender had a total of six clearances and one interception as she put on an incredible shift that night. As Coach Stoney said after the game, ‘Naomi Girma was exceptional tonight’.

And then there was fullback Kristen McNabb. As per Statsbomb, the defender had a total of two tackles, three interceptions, and four clearances. We’ve stated before that McNabb is one of the unsung heroes of the Wave and on that night, she proved why she’s worthy of having litanies sung about her.

As has been a constant occurrence for the team, the Wave had less possession than their opponents did. They only had the ball 42% of the time compared to Angel City’s 58%. However, despite ceding possession, they still managed to create a few scoring opportunities. San Diego had nine shots, which was only four less than their opponents. Both teams had an equal amount of shots on target (five) but in end, it was the home team who were more clinical and who scored the winning goal.

Doniak also had three shots on goal and the highest pass percentage rate (92%). Though Makenzy didn’t score the game-winner or save a penalty, her contributions to the Wave’s win cannot be understated.

And for the first time in a long while, the Wave had a lower xG than their opponents. This was due to Angel City’s press and how they interrupted their passing channels. The visitors managed to put on a good performance, despite playing back-to-back road games on just two-days rest.

In conclusion: This wasn’t the prettiest win. After the game, several of the Wave players and Coach Stoney admitted that they could do better. However, it is a testament to their resilience that they were able to grind out a win despite how they played.

And though Alex Morgan wasn’t too pleased with how the team played, she did state that she also wanted to focus on the positives. Those positives were in the form of Shaw’s goal and Sheridan’s save and in the end, they were enough to help the Wave win this game.

San Diego will take on Orlando Pride this Sunday. At least four Wave players have played for the Pride, including Alex Morgan and Jodie Taylor. Therefore, this game will see them return to familiar territory. The match will take place this Sunday and kickoff time will be at 4 PM PDT.