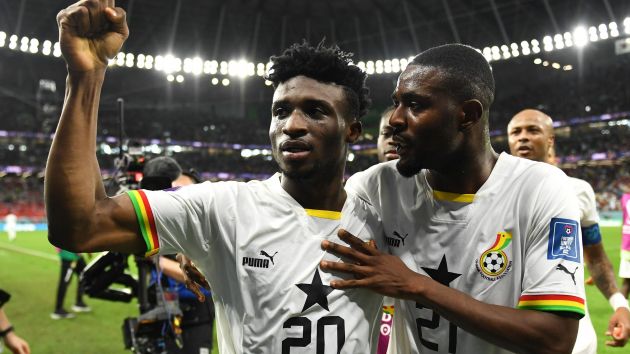 While his Champions League performances had already begun to catch the eye this season, Mohammed Kudus’ impressive showings for Ghana this World Cup have catapulted him into view of the globe. His brace against South Korea leaves Ghana with a solid chance of making the knockout rounds against Uruguay on Friday.Unsurprisingly, the links to big clubs have begun in earnest. Liverpool have been strongly linked with him, while in the last 24 hours, both Real Madrid and Barcelona are said to be watching him.Speaking to RadioMarca, Ghana and Athletic Club forward Inaki Williams explained that he knew that these kinds of performance were within Kudus.“I was already aware of him before coming, because I had heard about him and had seen his goals. When I played the last national team break with him, he already surprised me a lot. To my colleagues [at Athletic Club], when they asked me if someone had impressed me, I always talked about him.”Williams remarked that he felt Kudus was outgrowing Ajax too.“I think Ajax is starting to get too small for him and hopefully he will make the leap to a big club soon. I would have liked him to have had a Basque family member to be able to bring him to Bilbao because he is a bomb, he is a machine. He is very complete and with his young age, he still has a lot of room for improvement.”Asked if he could see Kudus playing for Real Madrid or Barcelona, Williams believed he had plenty of room to grow.“Yes. I see him playing in a big club. He has plenty of potential and a great margin for improvement, his ceiling has not yet been seen at all. I think he may be a revelation before long.”The 22-year-old has the chance to turn himself into a national hero with another match-winning performance against Uruguay. Williams actually picked up an assist for him against South Korea, after his miskick continued on towards Kudus for his second goal.The post Inaki Williams backs Ghana star Mohammed Kudus to make big move soon appeared first on Football España.