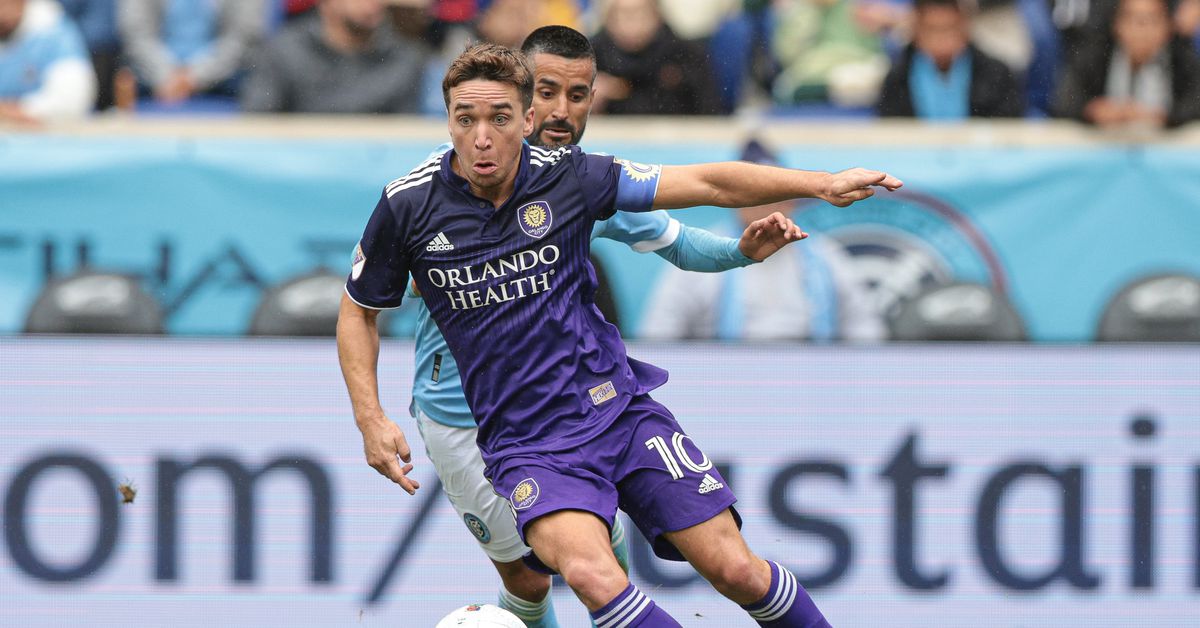 Facundo Torres put the Lions up early in the second half but Orlando couldn’t hold off NYCFC in a loss that jeopardizes the team’s playoff push.

Alex Callens and Talles Magno erased the lead provided by Facundo Torres’ strike to lift the defending champions. The loss sinks a sharp dagger into Orlando’s chance to play a home postseason game (but doesn’t mathematically eliminate the possibility), clinches a home playoff match for the team with the worst home in MLS, and makes the final two games for the Lions more nervy than they needed to be.

“A very tight game for both teams who understand the situation and the implication of the results,” Orlando City Head Coach Oscar Pareja said after the match. “I thought it was very (hard) fought. We were all working and trying to get the result. I thought we had the initiative on not just opening the scoring but just trying to keep up on the ambition to win the three points. At the point where we get unorganized on a couple plays where they tie the game and score the second one, we have a couple actions to tidy it up. And we couldn’t finish, but I thought the effort from the players was very good.”

Pareja’s lineup was nearly a fully first-choice group, with the exception of center back Robin Jansson (lower leg) still out despite two more weeks of rest and being listed as questionable. Goalkeeper Pedro Gallese played behind a back line of Joao Moutinho, Rodrigo Schlegel, Antonio Carlos, and Ruan. Cesar Araujo returned to the lineup in central midfield with Junior Urso behind an attacking midfield line of Ivan Angulo, Mauricio Pereyra, and Torres, with Ercan Kara up top.

The Lions got on the front foot first in the match with Pereyra getting a shot off in the third minute but he took too long to let the ball to settle first and Callens blocked his effort. Ruan came close to opening the scoring in the seventh minute off a long throw by Moutinho. The ball was cleared to Ruan at the top of the box and the fullback took his shot on the volley but it deflected wide off Callens, who made another block.

Schlegel did all he could to get onto the ensuing corner cross but could not put any power on his shot or place it where he wanted to as it bounced meekly wide.

The first NYCFC chance came in the 10th minute on a quick attack with Magno firing his shot just wide of the left post.

Two minutes later, the hosts thought they’d opened the scoring after a Ruan turnover started the counter. The ball was crossed from the left to Tayvon Gray on the right and his header ended up in the net but the flag went up immediately for Santiago Rodriguez, who either just got a touch on it or was judged to have been interfering by being in the goalkeeper’s vision. Video review confirmed the call on the pitch, but it was a close call.

Urso appeared to have a chance in the 21st minute on a good cross from Ruan but he smashed his shot right at Sean Johnson. The poor finish didn’t matter because Ruan was offside in the buildup.

Magno headed over off a good cross from Kevin O’Toole in the 24th minute on another good chance for New York City.

Torres tried to put Urso in behind in transition in the 29th minute with a good pass but the Brazilian missed the ball on his attempted first touch and by the time he caught back up to it, Johnson had come off his line to grab it.

29' | Great drive from Facu but the touch is just past Júnior and into the hands of Sean Johnson. 0-0 | #NYCvORLpic.twitter.com/f2JCMrIcin

The best buildup that led to a scoring chance in the half for either side came in first-half stoppage time. Carlos won the ball back with a good tackle in the middle of the pitch and the ball ended up with Torres, who played to Pereyra in the middle and then made a run. The captain sent a great through ball to Kara, who touched it on for Torres to run onto. The Uruguayan took a shot with his weaker right foot but a sliding Maxime Chanot got a piece of it to knock it into the outside netting.

The Lions couldn’t do anything with the ensuing corner kick or a long throw by Moutinho and the half ended scoreless.

The Lions wasted no time jumping on top after the break. Kara got his head to a long throw-in by Araujo and flicked it into traffic in the box. Torres anticipated where the ball would land, got there first, and swept it into the back of the net in the 47th minute. It was Torres’ eighth goal and 17th goal contribution of his first MLS season and Kara’s third assist and 13th goal contribution.

“It’s definitely one of our set plays that we work on,” Torres said of the buildup to the goal. “Pretty much before every game with Josema (Bazan). We worked on it two days before the game. Thankfully, it worked out in our favor to where we were able to get a goal and a little bit of luck.”

NYCFC immediately went into hyperdrive, playing as quickly as possible and even getting frustrated when Orlando didn’t restart the game quickly enough. Gabriel Pereira went for glory from outside the box in the 49th minute and hit his shot pretty well, but it fizzed over the bar.

Gabby almost hits back with a scorcher from distance pic.twitter.com/QkkjNl7Nfp

Urso tried from a similar distance a minute later but it was nowhere near the target. Kara came close to doubling the lead in the 60th minute when he took a pass from Pereyra in traffic, quickly turned his body, and fired a shot. It missed the net but not by much.

Substitute Keaton Parks smashed a shot from distance after a corner kick was cleared in the 61st minute and the ball dipped and bounced just in front of Gallese, who could only fight it off rather than catch it. Callens got to the rebound first but had to fire while turning and chipped his shot over the bar from a tight angle.

In the 64th minute, Gallese made his best save, coming out and blocking a shot by Rodriguez, who got in behind with a well-timed run. Schlegel did well to head the rebound out of harm’s way on a contested ball in the air. But two minutes later, the hosts equalized anyway.

Orlando City cleared the corner kick following Schlegel’s header off the Gallese save but NYCFC maintained possession outside the area. The Pigeons worked the ball across the top of the box and it took multiple bounces to stay in the area. Angulo tried to block it but Parks faked his shot and it got through him, then Carlos went for a clearance and missed it. Ultimately, it squirted to Magno on the left, who crossed in from the left past Gallese’s sliding attempt to block it. It fell in the six to Callens, who was left unmarked due to Carlos being too slow to recover after trying to clear. Callens was all alone in front and tapped it in for his third goal in as many games in all competitions, tying the game at 1-1 in the 66th minute.

He defends, he attacks, he is Alex Callens pic.twitter.com/KBzyo7iWdS

The Lions weren’t content with the 1-1 scoreline and continued to press for a win. Urso had a shot blocked at the top of the area in the 70th minute and a beautiful curling cross was just out of substitute Tesho Akindele’s reach moments later on a run that got him in behind.

The game could have changed in the 79th minute. Torres got forward in transition and his shot was blocked by Chanot. Torres shouted for handball but it wasn’t off Chanot’s hand and the play continued. On an ensuing ball into the area, there was another shout for handball as it appeared Parks may have handled it but there was again no call made and when the ball went out for a goal kick at the other end, there didn’t seem to be a stop for a review. The home broadcast feed never reviewed the second play so I couldn’t say if it should have been a penalty but Pareja was adamant about it after the match, calling it a “clear handball” that wasn’t given.

“Obviously disappointed about the call,” Pareja said. “It was the thing that just kept us down right now. Not even a (VAR) check and that’s what frustrated us the most, but I don’t want to keep going on this. You saw it. Everybody saw it. It’s clear.”

A road point would still have helped Orlando City’s cause but that evaporated in the 81st minute. The Lions got caught too far forward in defense and New York City made them pay for it. Moutinho was high on the pitch helping to press but then the ball sprung in behind him to start the break. Schlegel tried to cut the transition chance off before it started but the ball got through him and Magno, who hadn’t scored in ages, carried down the right side of the box and placed a perfect shot inside the far post past Gallese to make it 2-1.

The Boys in Blue go from front to back for the go-ahead goal ⚽️ pic.twitter.com/KO0LfCeyrZ

“A bad decision from us,” Pareja said about the play. “I think it’s a product of our ambition to go and win the game in that moment when the game was tied. And on that particular play that we should have delayed it and waited. But it was a very quick and fast play where the ambition of the two defenders that we had, Joao and Rodri, we could have delayed it. But they did an excellent job of just trying to be ahead as well, and push and press. And then this one, we just unfortunately just conceded that space. We could handle it different, obviously.”

Orlando struggled to maintain enough possession to create chances late in normal time and referee Joe Dickerson added only three minutes of stoppage time despite three goals, numerous substitutions by both teams, and a couple of knocks that delayed restarts. Whether Orlando would have done anything with more time is unknown, but that doesn’t mean three minutes was the appropriate time to give. It’s all immaterial at this point anyway.

“We’re hurting after that loss,” Torres said. “We arrived into the game with a lot of hope and goals to win this game and to put ourselves in a good position on the table, and we came away with a loss.”

City can only get a home playoff match by winning out and having Charlotte take something from its final match at the New York Red Bulls on Decision Day. As the Lions have dropped three of their last four league matches, the focus has to just be on getting in at this point, and if it leads to hosting a game, so be it.

“We have been in this mode of must-win and games that are important in the last two months and a half, so it’s not strange for us to be in this mode of needing to win and get the points to qualify,” Pareja said. “We hope that these two days are enough to recover the group and face the next game on Wednesday in Miami, and we still have another one at home.”

Orlando City will close out the road portion of the regular-season on Wednesday with a quick turnaround against Inter Miami in Fort Lauderdale. That match obviously takes on much more importance after the Lions failed to bring any points home from today’s game.