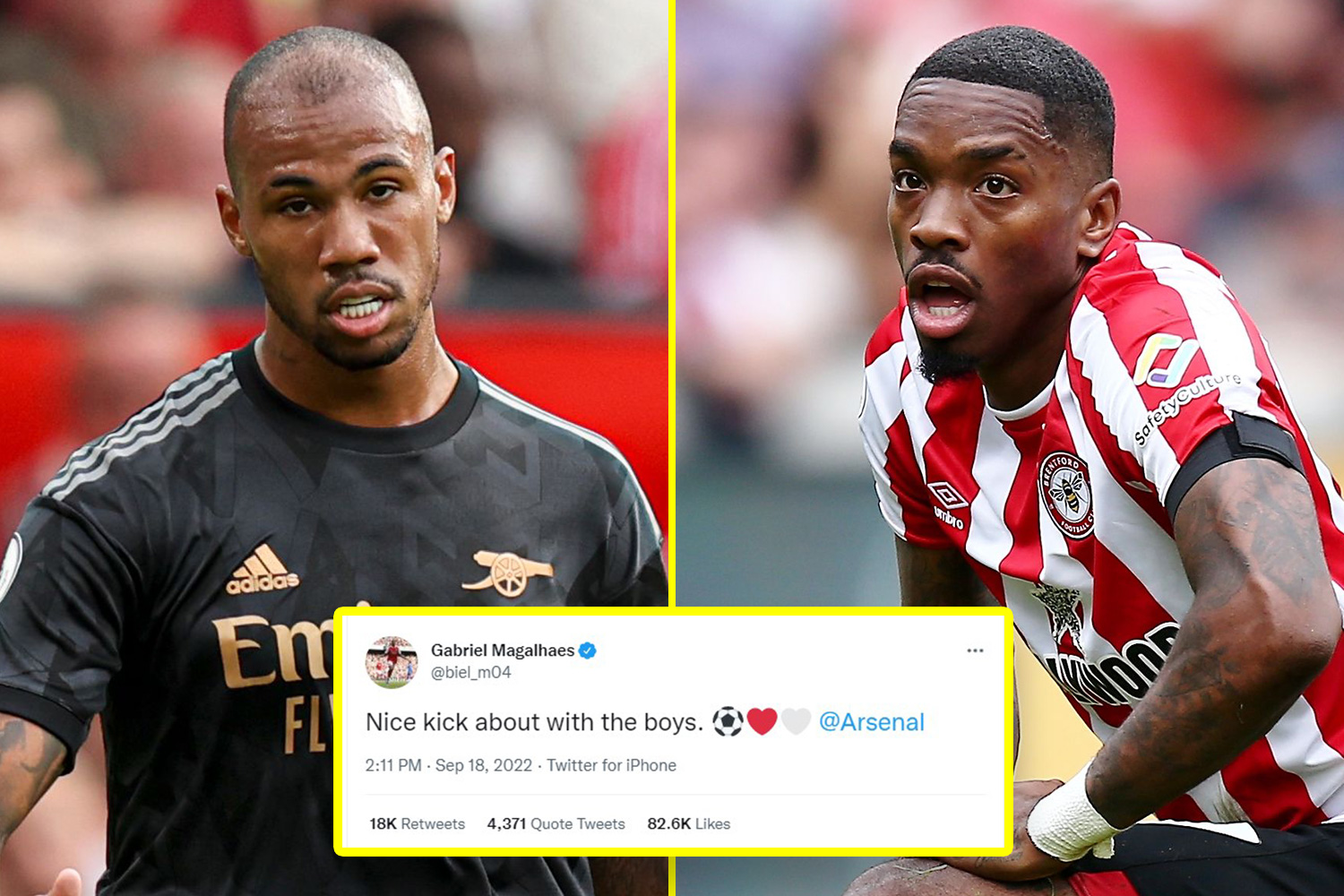 You might think Arsenal players would be celebrating a brilliant 3-0 win over Brentford but, instead, they’re focussed on events long ago. The Gunners were tremendous in west London as they defeated the Bees with ease thanks to goals from William Saliba, Gabriel Jesus, and Fabio Vieira. Arsenal celebrated the win over Brentford in styleGetty Gabriel helped Arsenal push aside Brentford but clearly has last season’s loss still on his mindGetty Manager Mikel Arteta even helped create Premier League history on the day, making Ethan Nwaneri the youngest player to make an appearance in the division. He entered the fray for Vieira at the age of 15 years and 181 days old. And yet, after the result, it appears at least one Arsenal player – Gabriel – was still thinking about a game more than a year ago. In August 2021, a newly-promoted Brentford side beat them 2-0 at the Gtech Community Stadium. After that clash, Ivan Toney tweeted: “Nice kick about with the boys.” It rattled Arteta at the time and the Spaniard used it as inspiration for their 2-1 win at the Emirates Stadium in February. Arteta brought Toney’s tweet onto a screen in the dressing room to motivate his players in the Amazon documentary Arsenal: All or Nothingamazon prime Lacazette poked fun at Brentford and Toney back in February Defender Gabriel reacted after the 3-0 win Most read in Football LIVE Brentford 0-3 Arsenal LIVE reaction: Vieira scores pick of the goals as Gunners win class Arsenal leapfrog Man City in 'totally dominant' win but doubts over title credentials TREBLE Dier reveals what Spurs stars said to Son in the changing room after hat-trick starlet Arsenal wonderkid smashes Premier League record once held by Liverpool starlet unfair Ex-Chelsea and Man United star joins outrage over ref banned for VAR review on phone unbelievable 'You're not a fraud' - Kamara thanks Boro fans who unveiled classy banner Ahead of the game, he showed his players the tweet, and, as revealed on All or Nothing, he shouted: “Before I go, because it’s still in my stomach and I have managed to keep it for four months, five months, six months. “This is Toney after the game when we played at Brentford. You know what he did? You know his tweet? Nice kick about with the boys. “So today they play in our house, guys there is only one team on that f****** pitch – and it’s us! Only one team, it’s like they don’t play football. “We take that fing ball, we take the game, we go for it and let’s f****** win this game!” They did, with Alexandre Lacazette parrotting Toney’s tweet after the game. And now, more than a year after the loss, defender Gabriel has also tweeted the same. Watch the World Cup with talkSPORT At talkSPORT we are powered by fans, so come and join us for the ultimate World Cup fan experience this winter – at the talkSPORT Fan Zone. In a huge indoor venue under the arches at Waterloo in London, we’ll bring you live screenings of every World Cup game. There will be Q&As with talkSPORT talent, you’ll be part of our live broadcasts, and there will be plenty of food and drink on offer too. Come and enjoy the best World Cup fan experience in London – and enjoy a pint on us – with tickets for England and Wales’ group stage games on sale now HERE!