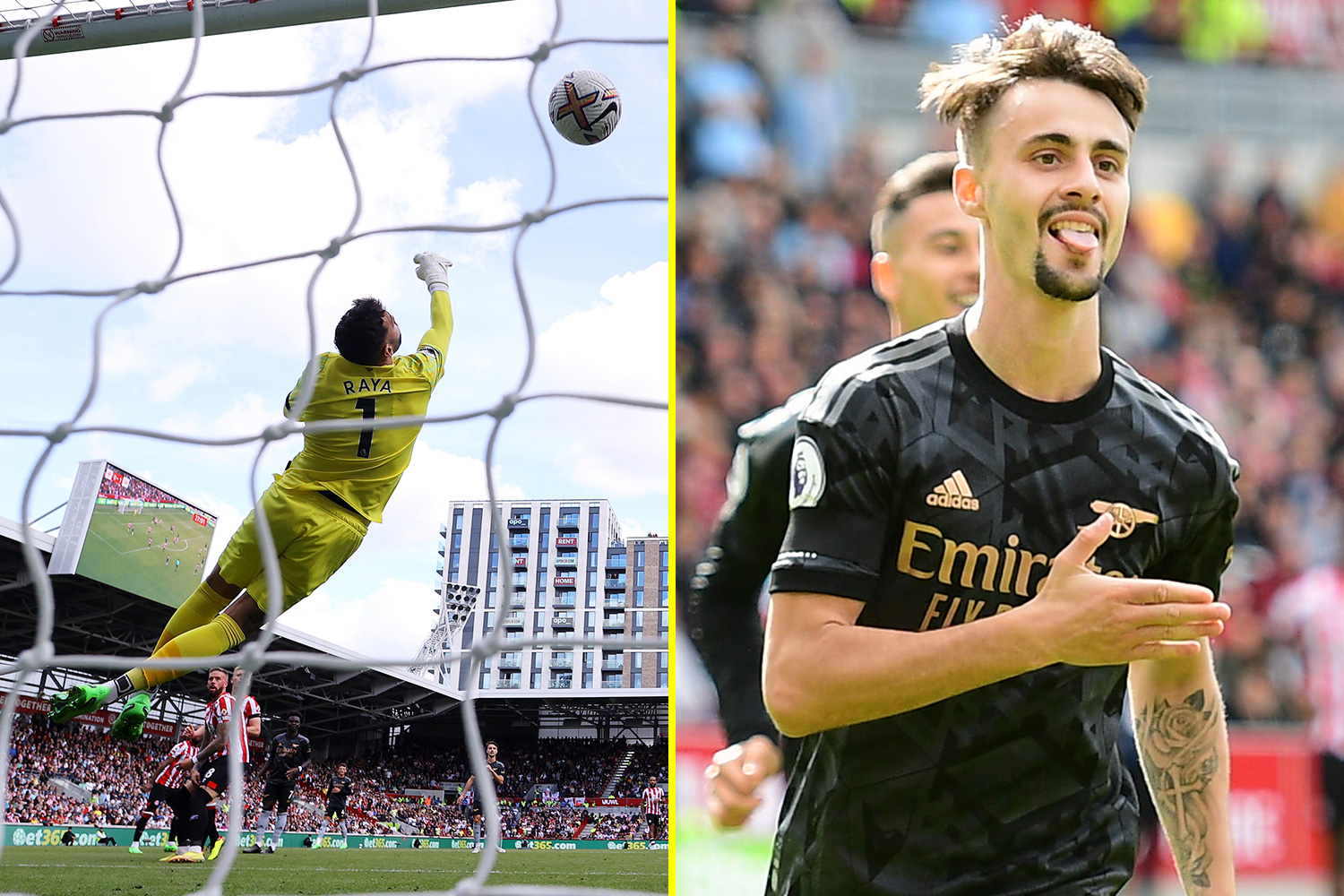 Arsenal returned to the top of the Premier League table with a dominant 3-0 victory over Brentford on Sunday. Goals from William Saliba, Gabriel Jesus and Fabio Vieira ensured the Gunners’ restored their one point advantage over Man City going into the international break. Saliba has scored two Premier League goals this seasonGetty Jesus celebrated his goal in style against BrentfordGetty It was an important victory, and performance, for Mikel Arteta’s side who bounced back from their defeat to Manchester United last time out. There was no Oleksandr Zinchenko and Martin Odegaard, however they were boosted by the return of Thomas Partey. Arsenal were quick to stamp their authority on the game with William Saliba heading his side into an early first-half lead. The defender met Bukayo Saka’s corner and the ball flicked off the far post and over the line to put the Gunners 1-0 up. Bees stopper David Raya palmed the ball away but it had already crossed the line, with the strike awarded by goal-line technology. Gabriel Jesus headed home to put Arsenal 2-0 up and in control at Brentford. Vieira scored on what was his full Premier League debut Most read in Football LIVE Brentford 0-3 Arsenal LIVE reaction: Vieira scores pick of the goals as Gunners win TREBLE Dier reveals what Spurs stars said to Son in the changing room after hat-trick starlet Arsenal wonderkid smashes Premier League record once held by Liverpool starlet unfair Ex-Chelsea and Man United star joins outrage over ref banned for VAR review on phone unbelievable 'You're not a fraud' - Kamara thanks Boro fans who unveiled classy banner HE'S BACK Son left 'emotional' by hat-trick as Conte says he's 'lucky' to manage Spurs star The in-form Brazilian lost his marker before delivering a fine finish after meeting Granit Xhaka’s masterful cross. Fabio Vieira whipped home from 20 yards to put Arsenal 3-0 up shortly after half-time on his full Premier League debut. The Portuguese midfielder’s finish was sublime and made quite the impression in the absence of Odegaard. The Gunners then made Premier League history by bringing on Ethan Nwaneri to become the youngest player in the competition’s history at 15 years and 181 days. Brentford were unable to muster any response and talkSPORT pundit was raving about Mikel Arteta’s side. Nwaneri is now the youngest player in Premier League historyGetty “They are totally dominant in all aspects of this game,” Townsend said. “This scoreline doesn’t flatter Arsenal.” The Gunners return to the top of the Premier League table after seven games and have fans dreaming of a title challenge. However, Townsend still is yet to be convinced they will mount a realistic challenge. He added: “I don’t believe they will be right up there when it matters, but I’m very impressed with what I’m witnessing right now.”