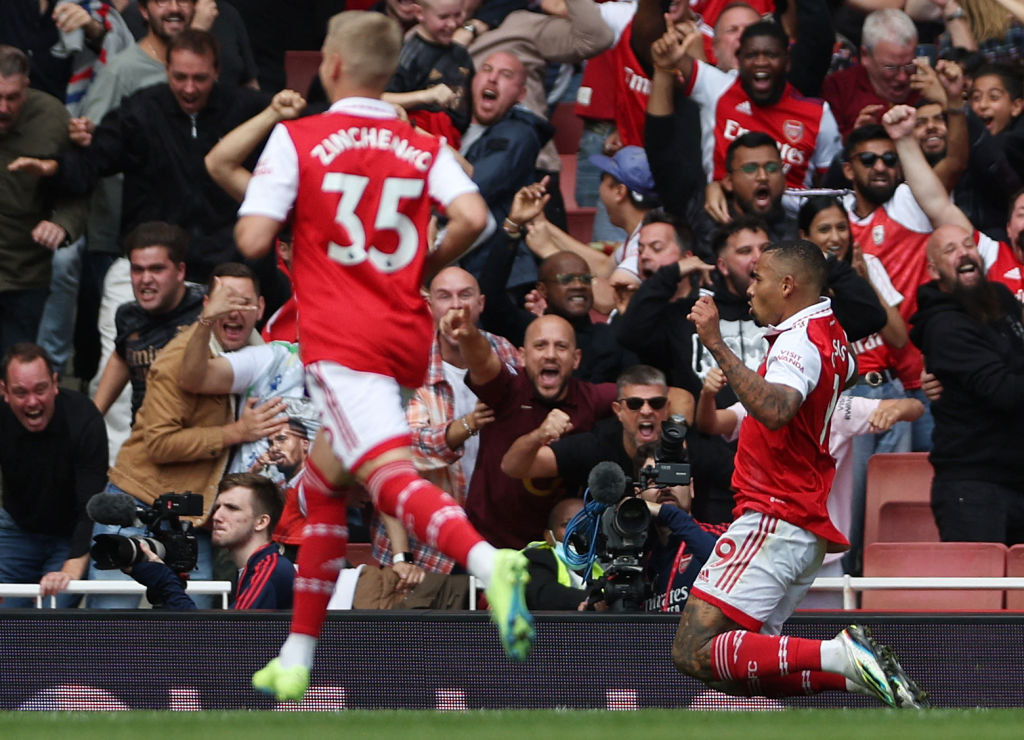 Legendary Arsenal boss Arsene Wenger has backed Mikel Arteta’s men to challenge Manchester City for the Premier League title. But the 72-year-old has ruled out Tottenham of being able to compete, explaining it’s in DNA to go against the Gunners’ bitter rivals. Arsenal are title contenders, says former Gunners boss Wenger, who has backed the side to challenge Man CityAFP But Wenger jokingly said it’s not possible for him as an Arsenal man to think about Spurs challengingGetty Arsenal thumped Antonio Conte’s side 3-1 at the Emirates on Saturday to remain top of the Premier League table after eight games. Goals from Thomas Partey, Gabriel Jesus and Granit Xhaka secured victory for the hosts as they condemned Spurs to a first top-flight defeat of the season. Manchester City’s 6-3 win over Manchester United on Sunday closed Arsenal’s gap at the top to just one point. And Wenger believes the Citizens are the favourites to retain their crown, with City winning the league in four out of the last five years. But the Frenchman has insisted Arsenal are their nearest challengers with Wenger of the belief that his former employers are currently the second best team in England. Speaking on beIN SPORTS, he was asked whether Arsenal are battling City for top honours. Most read in Football DEFIANT 'I'm not stupid' - Conte addresses Spence stance as pundit backs manager's decision tirade Man City staff 'overheard' furious half-time rant led by two Man United stars finally Forgotten man set for first Anfield start two seasons on from signing for Liverpool update Premier League footballer arrested on suspicion of rape has bail extended at source Haaland form 'scarcely believable' and can only be stopped in one way - Gallagher tense 'Quite insulting' - Maddison hits back at England claims in awkward chat with Neville To which Wenger said: “Yeah. Personally I would put Arsenal just behind Manchester City. “Arsenal are the second best team who have a good chance to win the Premier League. “Because Manchester City at some stage will focus highly on winning the Champions League.” Wenger then went on to discuss other potential contenders, but hasn’t been left convinced by any other side. Wenger says Arteta’s side are the second best team in the land right nowgetty "Personally I would put them behind Man City!"Arsène Wenger has labelled former side Arsenal the second best side in the Premier League! #beINPL #AFC pic.twitter.com/VAkz1SRG2w— beIN SPORTS (@beINSPORTS_EN) October 2, 2022 He added: “We don’t know about Liverpool, but they are already 11 points behind. Ten points behind Man City is a mountain to climb. “Chelsea do not look consistent – at the moment, they have not found the confidence to pretend to win the league.” As for Tottenham, who trail Arsenal by four points, Wenger joked that he cannot bring himself to even put them in contention to challenge. He quipped: “Tottenham anyway, by my DNA, I cannot believe they will win.” Arsenal face Liverpool up next in the league after their Europa League encounter against Bodo/Glimt on Thursday. Reds boss Jurgen Klopp has stated he knows his side will be up against an ‘unbelievably strong Arsenal team’ as he highlighted skipper Martin Odegaard as their danger man. OFFER OF THE DAY NEW CUSTOMER OFFER Back this treble with Betway and get your money back (up to £30) if it loses – CLAIM HERE Tottenham to beat E. Frankfurt Ajax to beat Napoli Barcelona to beat Inter Milan A £30 bet at 7/1 returns £240 or get your money back as a free bet! T&Cs: New UK customers only. Min Deposit: £5. Maximum Free Bet: £30. First bet on a Football or Horse Racing multiple with 3+ selections. Overall odds: 3.00 (2/1) or higher. Free Bets available upon settlement of the qualifying bet. Debit card deposits only. Deposit method restrictions apply. This offer is valid for 7 days from your new account being registered. 18+. BeGambleAware.org. Bet The Responsible Way. Full terms apply.