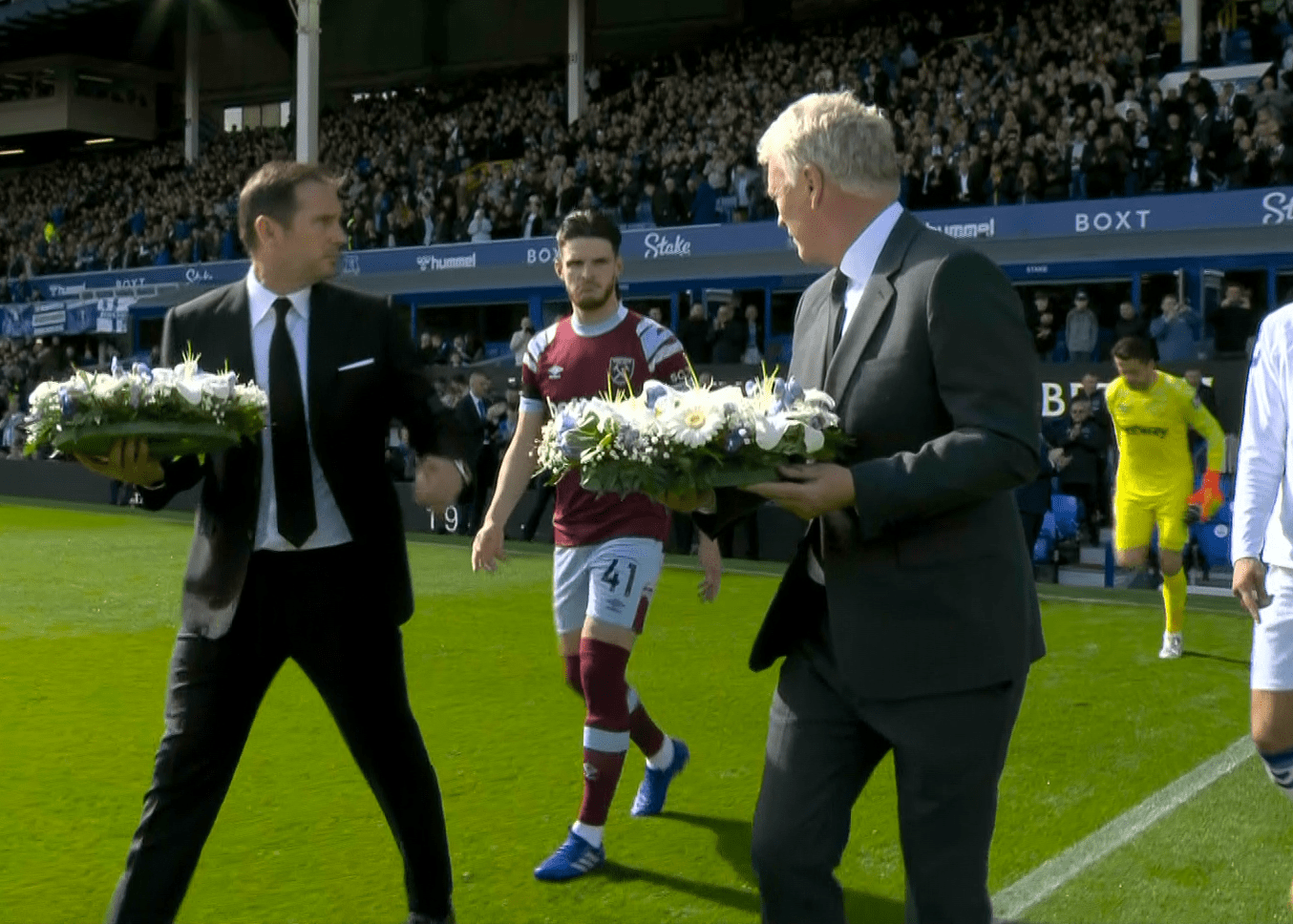 David Moyes and Frank Lampard accidentally led the wrong teams ahead the Everton vs West Ham clash on Sunday. The two bosses were responsible for walking their sides out of the tunnel at Goodison Park and onto the pitch while carrying wreaths. Lampard and Moyes were spotted leading out the wrong teams at Goodison ParkSky Sports Rice could be seen telling his manager to swap places with MoyesSky Sports Moyes and Lampard then swiftly swapped places before continuing their walkSky Sports The two managers then laid the two wreaths in the centre circleGetty These were laid in the centre circle as part of the tribute to Her Majesty, Queen Elizabeth II who passed away last week. After a clear mix-up in the tunnel, Lampard filed out ahead of Declan Rice and the West Ham team, while Moyes led his former club Everton onto the pitch. Thankfully, the Hammers’ skipper Rice could be seen having a quiet word to his manager as they walked onto the pitch which led to Moyes and Lampard smoothly swapping places. They then laid the wreaths in the middle of the pitch at Goodison Park before entering into a minutes’ silence in tribute to The Queen. Most read in Football LIVE Brentford 0-3 Arsenal LIVE reaction: Vieira scores pick of the goals as Gunners win TREBLE Dier reveals what Spurs stars said to Son in the changing room after hat-trick starlet Arsenal wonderkid smashes Premier League record once held by Liverpool starlet unfair Ex-Chelsea and Man United star joins outrage over ref banned for VAR review on phone unbelievable 'You're not a fraud' - Kamara thanks Boro fans who unveiled classy banner HE'S BACK Son left 'emotional' by hat-trick as Conte says he's 'lucky' to manage Spurs star The two sides and the fans in attendance then observed a minutes’ silence before launching into God Save The KingGetty Mykolenko showed his class by giving his jacket to a young mascotSky Sports This led to another heartwarming moment as Vitaliy Mykolenko was pictured giving his jacket to a young mascot who was cold on the pitch. This was followed by an emotional rendition of God Save The King as football fans paid tribute ahead of the Queen’s state funeral on Monday morning.