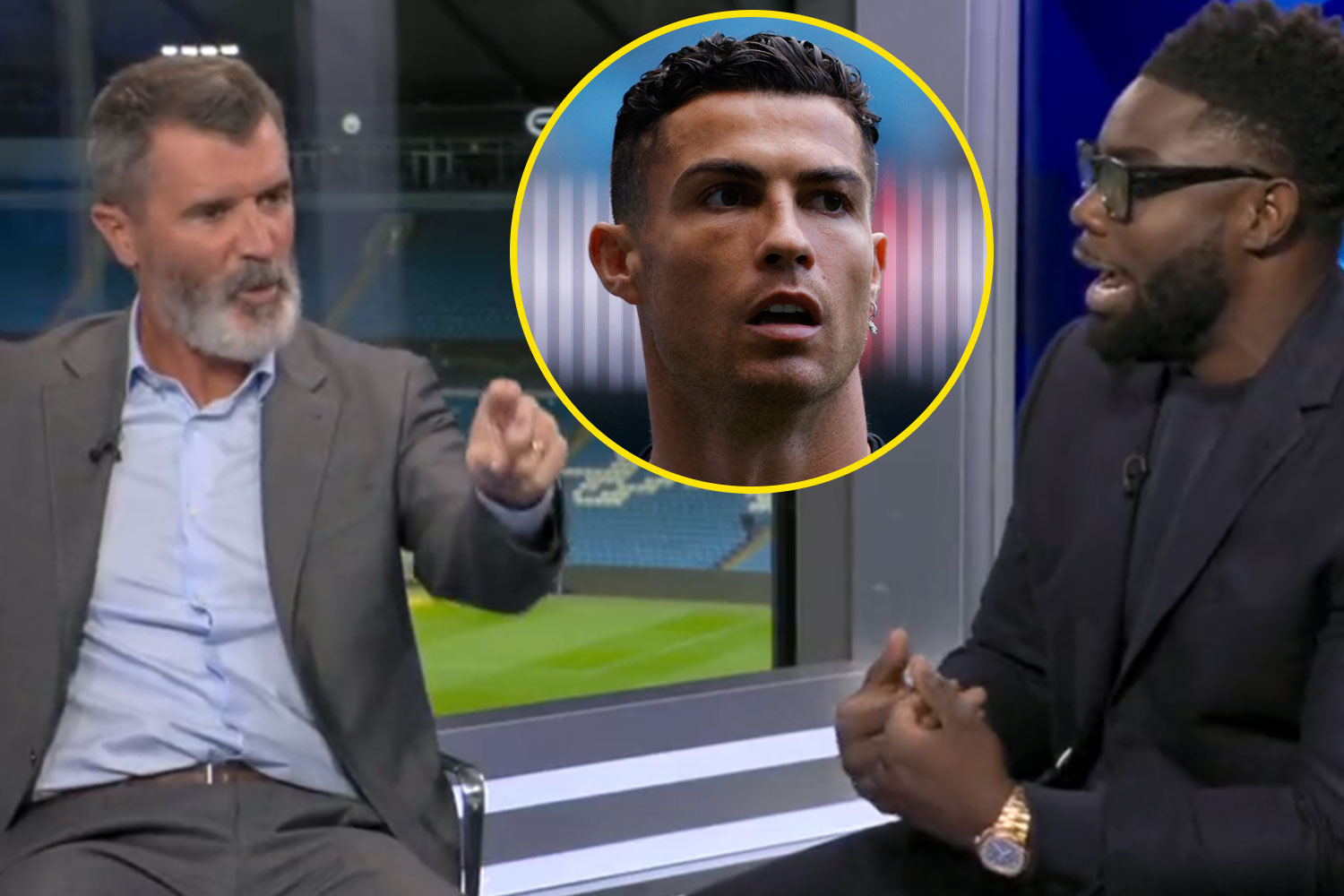 Roy Keane and Micah Richards got into a heated debate about Cristiano Ronaldo as Manchester United were accused of showing disrespect towards one of football’s greatest ever players. Passions ran high in the Sky Sports studio following United’s humbling at Manchester City with Red Devils legend Keane and ex-City defender Richards strongly disagreeing about the treatment of the Portuguese icon. Ronaldo sat on the bench for the full 90 minutes as Man United fell to a 6-3 defeatGetty Ten Hag said he didn’t play Ronaldo ‘out of respect for his career’Getty Ronaldo was once again benched with Erik ten Hag choosing to start Jadon Sancho, Marcus Rashford and Antony up front. The 37-year-old was seen with his head in his hands as City raced to a 4-0 lead inside the first 44 minutes, eventually going on to win the derby 6-3. Ten Hag used all five of his allotted substitutions at the Etihad Stadium but Ronaldo had no involvement in the match, something which Piers Morgan couldn’t believe. Keane was also irked by Ronaldo not featuring at any point, although Richards challenged the Irishman on this in what ignited into a furious debate with a whole lot of interrupting. Keane: The great players and the top players want to play week in, week out. Ronaldo did not come back to Manchester United to sit on the bench in a derby game. Richards: But does his style of play suit the way they want to go? Keane: – Oh Micah, here we go. Richards: You come to the Etihad, you know Manchester City are going to have the majority of the ball – Keane: They got hammered anyway! Richards: I know. Keane: You talk about pressing, pressing’s the new buzzword in football, pressing! Richards: When he’s set up you’re thinking how we’re going to win this game. Keane: I don’t care if a player’s not pressing if he’s going to get me 20/25 goals. He was the league’s leading scorer for Manchester United [last season]. I don’t think he was doing too much pressing then. Manchester United have lost three games this season already. Passions ran high after the match as Keane and Richards went toe-to-toe in their debatesky sports At this point host Kelly Cates suggested the rest of the Man United team weren’t as effective when Ronaldo was starting regularly last season. A still fired-up Keane responded: “Well that’s their fault. That’s their fault, not Ronaldo’s. I’ve never had a problem playing with a striker who’s going to score 20/25 goals ever, I don’t care if they never ran back or if they even got hold of it. “We had a torturous afternoon looking at Aston Villa because they couldn’t put the ball in the back of the net but we’re criticising Ronaldo because the ONLY thing he does is score goals!” Richards: But there is more to the game… I agree with you on Ronaldo. Keane: Not if it’s just attacking players. You’ve got other players who can do the – Richards: I said last season Ronaldo should be playing, I agree with you. But I’m saying the way the manager wants to set up now, coming to the Etihad on the counter-attack – Keane: And it worked (!) They’re 4-0 down at half time. Ten Hag has started Ronaldo on just three occasions this season, once in the league Richards: You know that Man City are going to out-pass you, outwork you – Keane: With or without Ronaldo Richards: So the manager probably thought before the game – Keane: Well he was wrong, well he was wrong – Richards: ‘I’m going to play high intensity players, and it didn’t work, I agree with you. But the results Man United have been getting against Liverpool, against Arsenal they’ve been sitting and playing on the counter-attack – Keane: And that’s fine… Richards: He’s [Ten Hag’s] played people who are going to press high and with intensity so he’s come into this game – Keane: Man United haven’t pressed before, is this the new buzzword? Richards: [Laughing] I’m not saying it’s a new buzzword – Keane: You don’t have to press – Richards: I’m saying this season playing that game on the counter-attack with pressing and playing – Keane: You don’t have to press all the time. Richards: I agree with you. Keane: Who was the leading goalscorer for United last season? Richards: Ronaldo! Keane: All right, brilliant. Roy Keane & Micah Richards clash over Cristiano Ronaldo's role at Manchester United! "𝐌𝐚𝐧𝐜𝐡𝐞𝐬𝐭𝐞𝐫 𝐔𝐧𝐢𝐭𝐞𝐝 𝐚𝐫𝐞 𝐝𝐢𝐬𝐫𝐞𝐬𝐩𝐞𝐜𝐭𝐢𝐧𝐠 𝐡𝐢𝐦"pic.twitter.com/GzIqHT4ffr— Sky Sports (@SkySports) October 2, 2022 Things then calmed down after that in the studios but Keane warned that things won’t calm down at Old Trafford if Ten Hag continues to snub the five-time Ballon d’Or winner. Keane added: “It will get ugly and deservedly so because Man United had the chance to let him go and they held onto him knowing, knowing that he was going to be sitting on the bench. “They’re not thinking he might start 60-70 per cent of the games, they did it knowing he’s going to be sitting on the bench for Man United. “The player deserves more than that.”