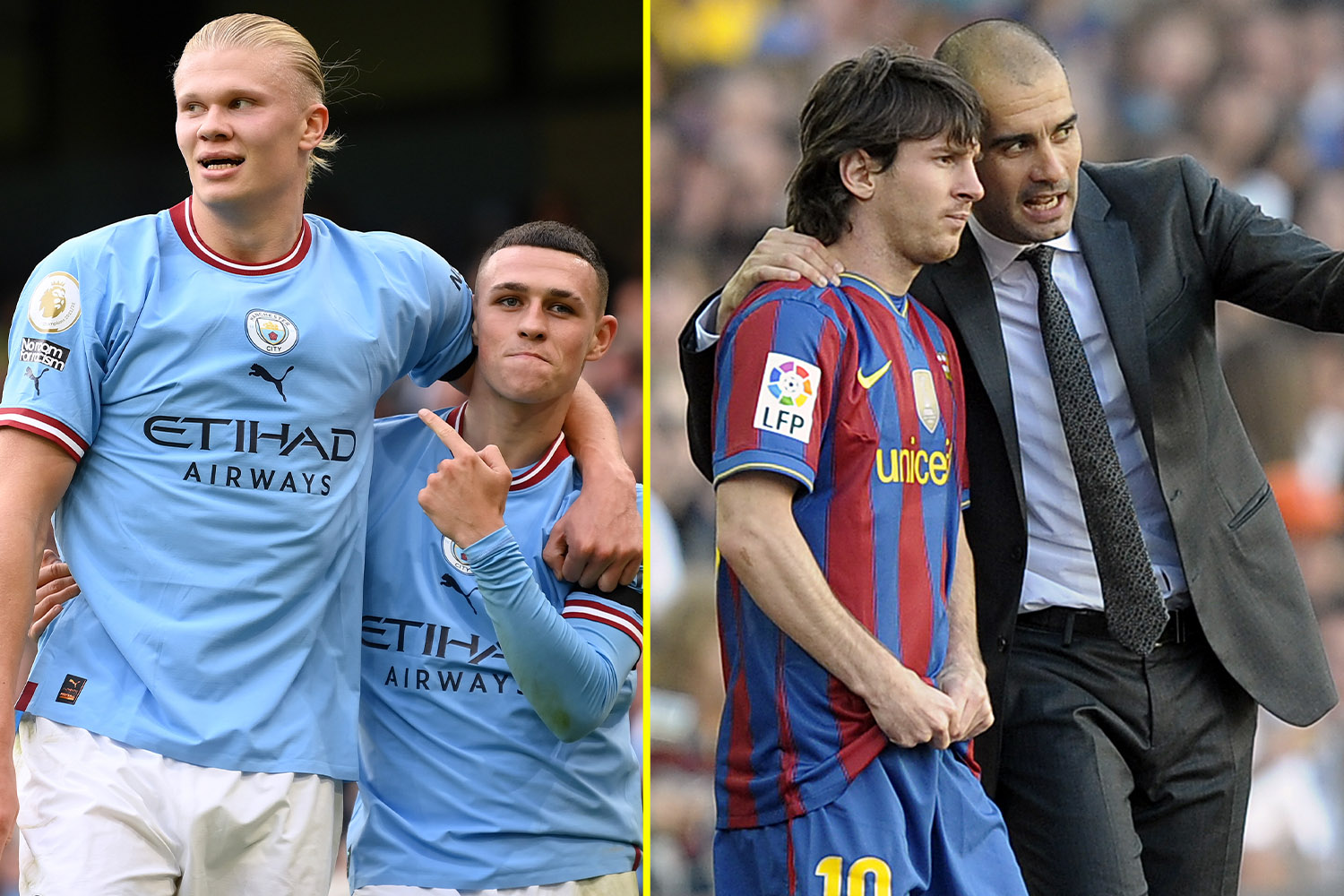 Erling Haaland may have put Manchester United to the sword but he wasn’t the only Man City star breaking records. Phil Foden has been on the scene for so long it’s easy to forget he’s just 22 years old – and he was in delightful form, scoring a hat-trick in the 6-3 victory. Foden has broken a record set by Lionel Messi with his hat-trick against Manchester UnitedGetty And in netting the historic treble at the Etihad Stadium, he beat a stunning record set by Lionel Messi. The Barcelona and Argentina icon, now at Paris Saint-Germain, thrilled under the tutelage of Pep Guardiola early on in his career. He managed to score 50 goals under the Spanish boss by the age of 22 years and 164 days. Foden, though, has smashed that with his treble, reaching 50 goals under Guardiola with his second strike of the day. He managed to net his half-century by the age of 22 years and 127 days The England international was in scintilating form on the day, combining delightfully with Haaland, who assisted his final two goals and got a treble of his own. Foden and Haaland made a mockery of the Manchester United defenceAFP Messi and Guardiola enjoyed remarkable success at Barcelona together but one of their records together has been tumbledgetty Most read in Football REACTION Man City 6-3 Man United LIVE: Haaland and Foden both bag hat-tricks in derby rout speak 'If I talk I will be in big trouble' - Vieira goes full Mourinho after Silva handball SAVAGE Conte reacts to Spurs loss by reminding Arsenal fans how they beat them to top four unimpressed 'It's poor' - Arsenal legend Keown hits back at Ferguson after 'babies' comment myth Keane didn't end Haaland's dad's career, but City star can still get revenge on United WOW Lionel Messi scores wonderful free-kick as Kasper Schmeichel is rooted to the spot The pair ensured Man City became just the third Premier League team to have two players score hat-tricks in the same match. Arsenal were the first with Jermaine Pennant and Robert Pires netting one each against Southampton in a 6-1 victory in May 2003. Meanwhile, Leicester City were the second with Jamie Vardy and Ayoze Perez also completed the feat against Southampton when they beat them 9-0 in 2019. After the game it had looked like Haaland had won the battle for the matchball but Ilkay Gundogan then nicked it off the Norwegian and handed it to Foden, before another ball was given to the striker. İlkay Gündoğan devrede! Hat-trick yapan Erling Haaland ile Phil Foden topu paylaşamıyor. #PL pic.twitter.com/4QGPmeDQHz— beIN SPORTS Türkiye (@beINSPORTS_TR) October 2, 2022 Watch the World Cup with talkSPORT At talkSPORT we are powered by fans, so come and join us for the ultimate World Cup fan experience this winter – at the talkSPORT Fan Zone. In a huge indoor venue under the arches at Waterloo in London, we’ll bring you live screenings of every World Cup game. There will be Q&As with talkSPORT talent, you’ll be part of our live broadcasts, and there will be plenty of food and drink on offer too. Come and enjoy the best World Cup fan experience in London – and enjoy a pint on us – with tickets for England and Wales’ group stage games on sale now HERE!