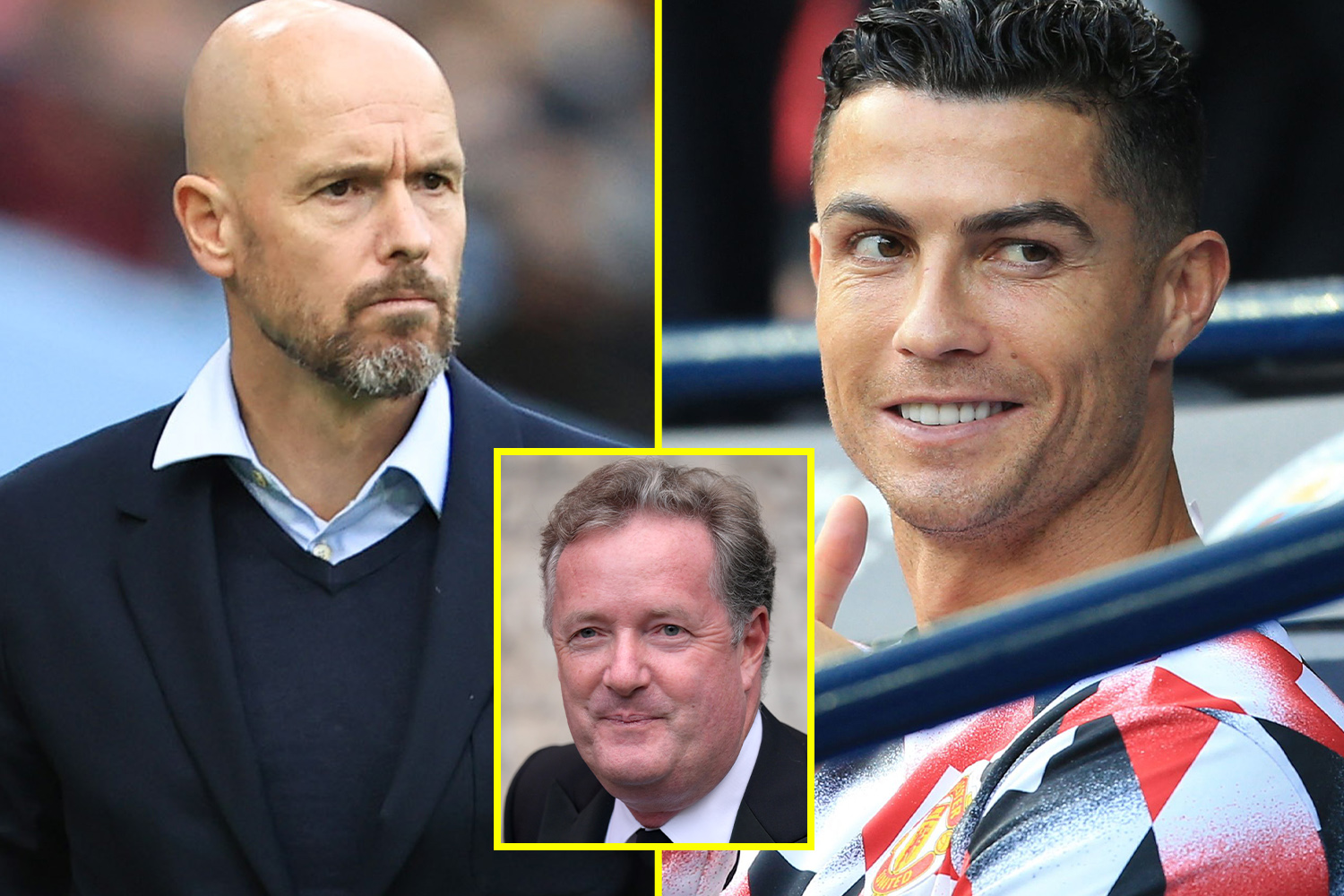 Erik ten Hag was slammed by Piers Morgan following his decision to not involve Cristiano Ronaldo during Manchester United’s defeat at Manchester City. The Red Devils boss watched his side succumb to a 6-3 loss to their local rivals in his first attempt at the Manchester derby on Sunday afternoon, with hat-tricks from Phil Foden and Erling Haaland seeing the home side cruise to victory. Ten Hag saw his side get outclassed at the Etihad StadiumGetty Ronaldo played no part in the derbyGetty The Red Devils capitulated against their local rivals in the first half as they found themselves 4-0 down with just 43 minutes on the clock. Man United did score three goals in the end, though, thanks to Antony and two goals from Anthony Martial. However, the second half resurgence proved to only be a consolation for Man United in the end following the first half horror show, leaving some to question why club talisman Ronaldo – who’s scored 5 times against City – was left on the bench. But for Ten Hag, the answer was a simple, yet rather unexpected reason. “I wouldn’t bring him in because out of respect for Cristiano, for his big career,” he explained. “And the other thing was the advantage I could bring Anthony Martial, he needs the minutes but I don’t want to point it out like that.” Ronaldo was seen with his head in his hands in the first halfpremier league Most read in Football REACTION Man City 6-3 Man United LIVE: Haaland and Foden both bag hat-tricks in derby rout cheat code Haaland breaks another Premier League record with Manchester derby hat-trick swipe Zaha bites back at Chelsea star's James 'lock' post on Instagram in deleted post speak 'If I talk I will be in big trouble' - Vieira goes full Mourinho after Silva handball SAVAGE Conte reacts to Spurs loss by reminding Arsenal fans how they beat them to top four unimpressed 'It's poor' - Arsenal legend Keown hits back at Ferguson after 'babies' comment Ten Hag’s reasoning didn’t sit well with Piers Morgan, who labelled the Man United boss as a ‘deluded arrogant twerp.’ “Imagine benching @Cristiano for Utd’s biggest game of the season, then using five other subs as they’re hammered into oblivion, and then claiming you did it ‘out of respect’ for him?” Morgan tweeted. “Ten Hag is an arrogant deluded twerp and the way he’s treating Ronaldo is disgraceful.” Man United legend Gary Neville said he saw what Ten Hag meant, saying bringing on Ronaldo when the match was already over could’ve been seen as an insult, but perhaps could have explained things better. “Oh come off it… you know Ronaldo would have been desperate to come on, whatever the score,” Morgan responded. Ten Hag says a lack of confidence amongst his squad was to blame for their defeatGetty Pep Guardiola’s side showed real talent in the derby. But for Ten Hag his side’s first half collapse wasn’t due to City‘s star’s abilities, but United’s attitude – despite them going into the tie off the back of four league wins. “Simple, a lack of belief, and you see the difference on the pitch,” Ten Hag explained after he was asked what went wrong in Sunday’s game. “The plan was to show bravery, confidence, but we didn’t from the first minute. We left Haaland to drop into too much space, we were not tight. “For instance for the first goal, we win the ball and create a great chance but instead we give it away and [we] collapsed like a pack of cards.” Watch the World Cup with talkSPORT At talkSPORT we are powered by fans, so come and join us for the ultimate World Cup fan experience this winter – at the talkSPORT Fan Zone. In a huge indoor venue under the arches at Waterloo in London, we’ll bring you live screenings of every World Cup game. There will be Q&As with talkSPORT talent, you’ll be part of our live broadcasts, and there will be plenty of food and drink on offer too. Come and enjoy the best World Cup fan experience in London – and enjoy a pint on us – with tickets for England and Wales’ group stage games on sale now HERE!