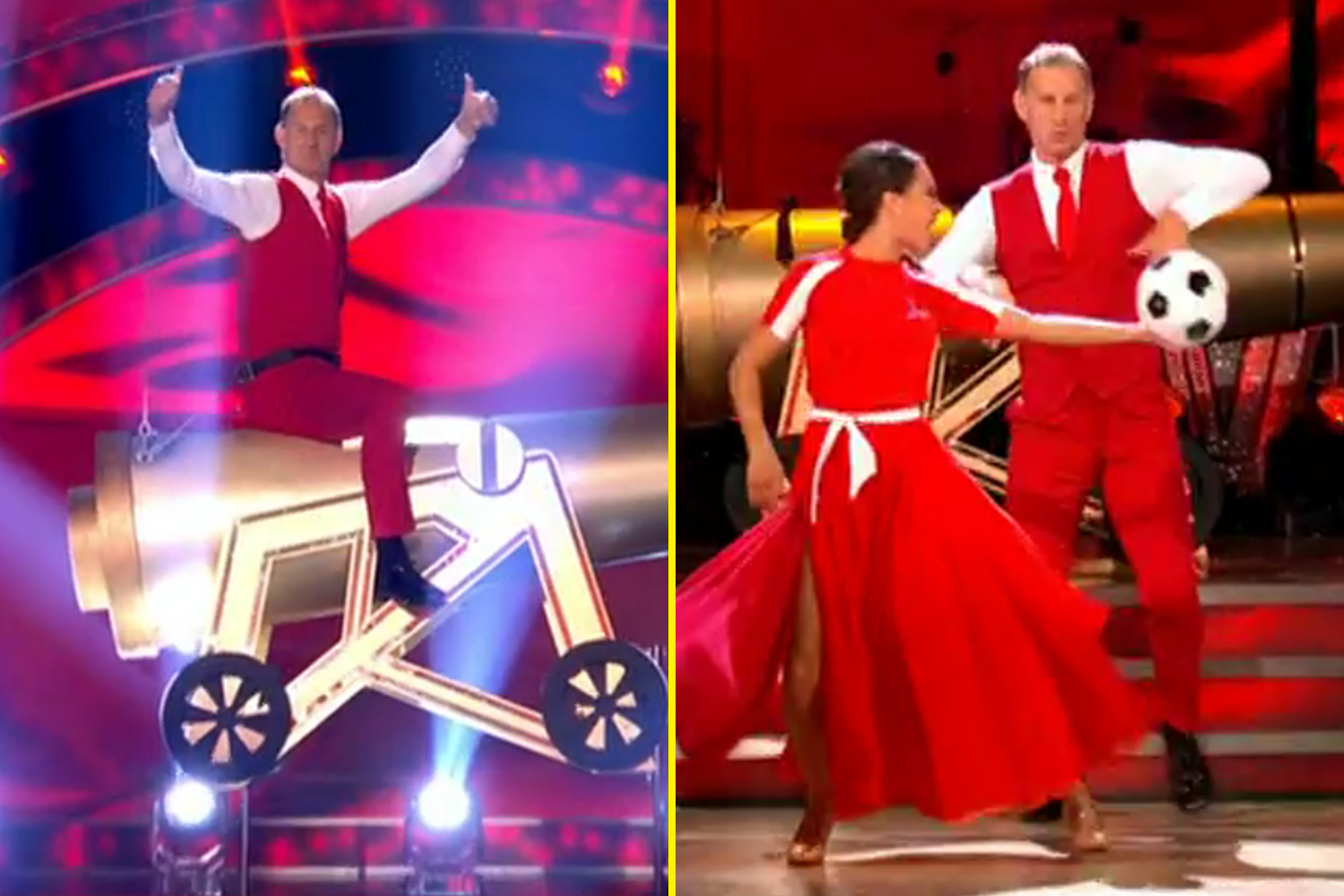 Tony Adams’ debut Strictly Come Dancing routine involved a golden cannon, his infamous Granada dance, a sequined number six, and even a flood of footballs. There wasn’t much hope held for the Arsenal legend after it was announced he was taking part on the hit BBC show but he still went out all guns blazing. Adams began by floating down on a golden cannonBBC And finished with his Granada dancebbc Riding down from the ceiling on a gold cannon, the Gunners’ club logo, it was clear what the audience were in for, but things just kept getting more bizarre. With his thumbs out like a lottery winner, Adams jumped off the prop and with a shout of ‘Come on!’ he then kicked away a football his spinning dance partner Katya Jones was carrying. Then as his version of the Tango began, it was quickly shown he had a sequined no.6 and ‘ADAMS’ on the back of his red waistcoat, the number he adorned for his career-long club between 1983 and 2000. Adams was one of England’s greatest ever players, leading Arsenal to three league titles, but it was Jones who was doing the leading in week one of Strictly. Dragging her partner around to the song Go West by the Pet Shop Boys, football fans would have recognised the tune as one of Arsenal’s trademarks that fans sing to at the Emirates, and all of a sudden everyone’s worst fears were confirmed. Adams and Jones broke apart with the lyrics of the song suddenly changing to ‘One-nil to the Arsenal’ and out of nowhere came Adams’ most infamous moment of his short-tenured management career. Adams was doomed to fail at Granada when his dance went viralskysports But he brilliantly owned the joke on national TVBBC Most read in Football past Keane booed and Berbatov scores beautiful goal, but Liverpool legends beat Man United have that YouTuber Speed gets revenge on KSI with brutal tackle in charity match third wheel Murray wants to take McCoist out for 60th birthday - but Brazil isn't invited LIST How to spend £1,841 in Norwich shop as questions asked of PM Truss over bizarre bill concern England 'sleep-walking into disastrous World Cup' as fans call for Southgate to go defiant Maguire defends England place and suggests Man United criticism is 'for clicks' The 55-year-old once surprisingly turned up at LaLiga side Granada in 2017 and despite losing all seven games as manager and overseeing the side’s relegation, there was one far more headline making moment from his time in Spain. Clips of the England legend’s training instructions turned him into an internet phenomenon when it looked like he was almost dancing in front of his squad, and the viral clips soon resurfaced when his Strictly attendance was announced. Adams had his six in tow And finished with a scattering of footballsBBC And in a brilliant effort to take ownership of the clip, Adams busted it out on the dance floor before the routine came to an end and footballs rained down. “I do have some positives,” said judge Craig Revel Horwood. “It had attack and it had aggression.” Fellow judge Anton Du Beke was far less generous though. “When you come out and dance we don’t know your routine,” he said. “But unfortunately neither did you.” Watch the World Cup with talkSPORT At talkSPORT we are powered by fans, so come and join us for the ultimate World Cup fan experience this winter – at the talkSPORT Fan Zone. In a huge indoor venue under the arches at Waterloo in London, we’ll bring you live screenings of every World Cup game. There will be Q&As with talkSPORT talent, you’ll be part of our live broadcasts, and there will be plenty of food and drink on offer too. Come and enjoy the best World Cup fan experience in London – and enjoy a pint on us – with tickets for England and Wales’ group stage games on sale now HERE!